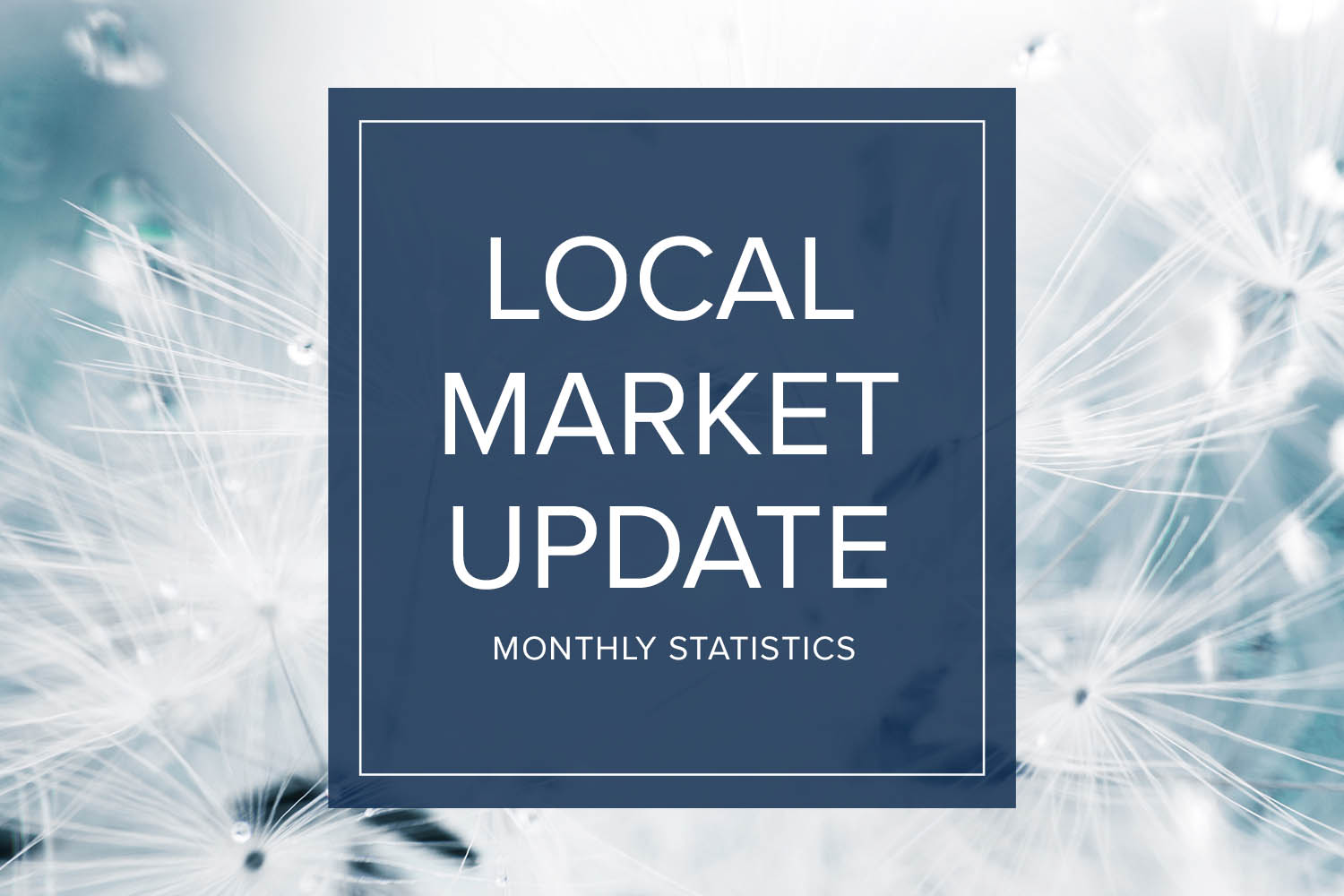 Windermere is focused on keeping our clients and our community safe and connected. We’re all in this together. Since the early days of COVID-19, our philosophy has been “Go slow and do no harm.” While real estate has been deemed an “essential” business, we have adopted guidelines that prioritize everyone’s safety and wellness.

Like everything else in our world, real estate is not business as usual. While market statistics certainly aren’t our focus at this time, we’ve opted to include our usual monthly report for those who may be interested. A few key points:

Every Monday Windermere Chief Economist Matthew Gardner provides an update regarding the impact of COVID-19 on the US economy and housing market. You can get Matthew’s latest update here.

Stay healthy and be safe. We’ll get through this together. 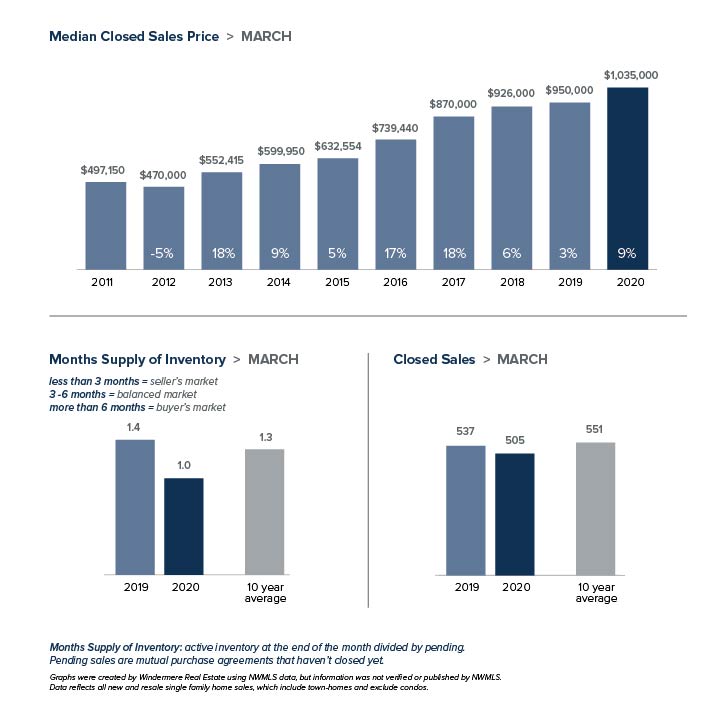 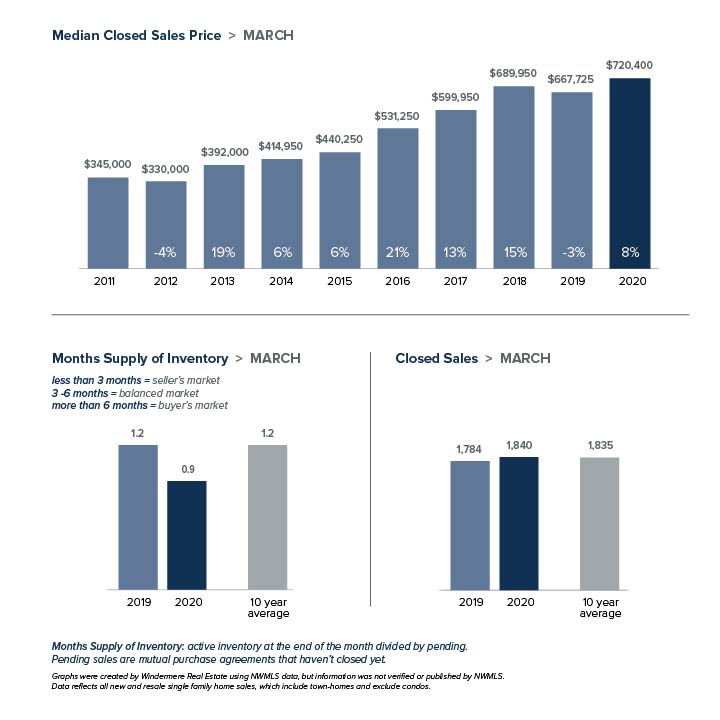 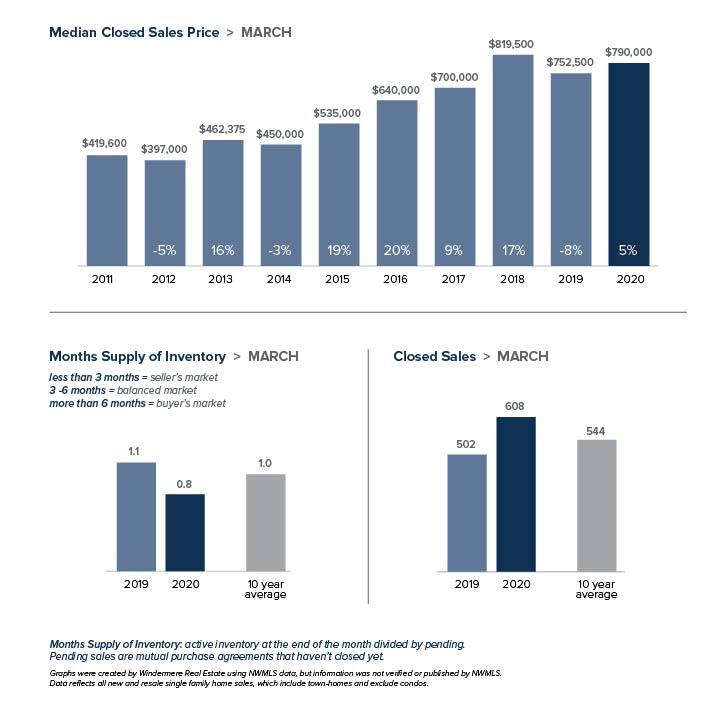 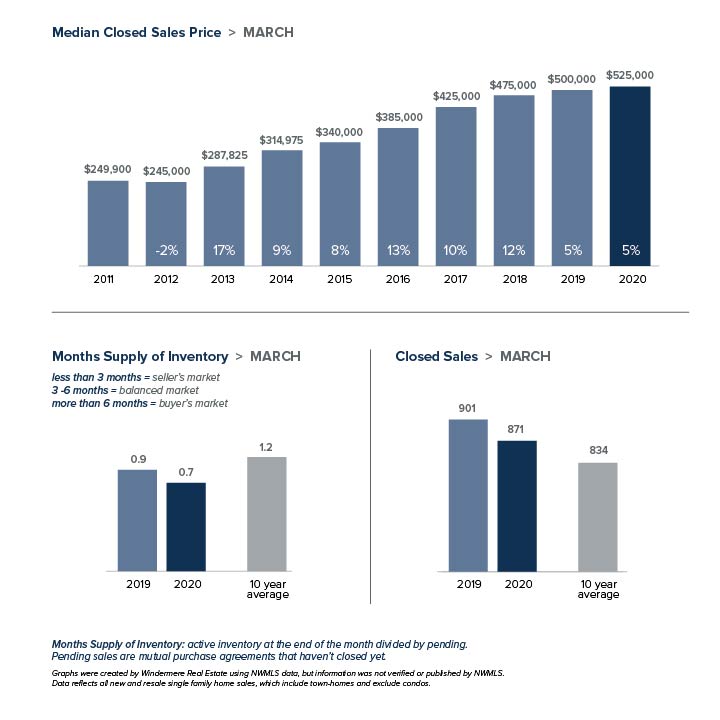 Matthew Gardner – Will There Be A Recession in 2020?

Windermere Chief Economist, Matthew Gardner, answers the most pressing question on everyone’s minds: Will there be a recession in 2020? Here’s what he expects to see.

2019 ended with too many buyers chasing too few homes. December marked the sixth straight month of declining supply. The severe shortage of homes, historically low interest rates, and strong job growth are predicted to keep the local housing market strong in 2020. In a region starved for inventory, sellers can expect significant interest in new listings.

Homes sold briskly on the Eastside in December in all categories, including the luxury market. The number of listings were down nearly 50% from a year ago and the area had under a month of available inventory. That lack of inventory helped bump the median price of a single-family home up 4% from a year ago to $949,000, which is a $49,000 increase from November.  New large scale developments and a strong economic forecast indicate that the housing market will remain healthy.

King County continues to be a seller’s market. Inventory in December was down nearly 40% compared to a year ago and ended the month with below one month supply. The median price of a single-family home rose 6% over the prior year to $675,000, up slightly from November. More affordable areas saw much higher increases. Southeast King County – which includes Auburn, Kent and Renton – saw home prices jump 16% over the previous year.

Numbers tell the story in Seattle. Inventory was down 25%, while the number of closed sales increased 19%. Strong demand here has kept the housing market solid, with prices fluctuating slightly month-to-month for much of 2019. The median price of a single-family home sold in December increased 2% from a year ago to $727,000. That was slightly down from $735,000 in November.

While the median home price in Snohomish County is less than that in King County, the gap continues to close. Buyers willing to trade a longer commute for a lower mortgage have kept demand and prices strong. Inventory here was off 36% in December as compared to a year ago. The median price of a single-family home rose 9% over a year ago to $510,000, an increase of $15,000 from November.

Seattle is growing up, literally, when it comes to its housing market, ranking fourth among the 30 largest cities in the country in an assessment of cities with most high-rise apartment complexes built over the past decade, a recent RentCafe study shows.

High-rise apartment buildings represented 9% of all new multifamily development in the city over the past decade, up from 5% in the 1990s, the study found.

“Of the 26 residential high-rises delivered in the last decade, six were skyscrapers (of 40-plus floors),” according to the report by the apartment-search platform RentCafe. “No wonder the average number of floors for all types of apartment buildings in Seattle went from five in the ’90s to eight in the current decade.”

“Seattle witnessed a veritable residential high-rise boom in the last decade,” the RentCafe report says. “The number of completed apartment high-rises [in the city] jumped from three in the ’90s to a significant 26 in the ’10s.”

The trend toward high-rise apartment development in Seattle is likely to continue in the coming decade, as Seattle Business reported earlier this year.

Seattle has seen the number of jobs and people living and working in downtown grow by nearly 40 percent over the past decade, giving rise to a report from the Downtown Seattle Association that contends unless Seattle adjusts its zoning guidelines, the downtown area will have “only a few viable sites for the next development cycle.”

One solution is to expand vertically, rather than horizontally near mass transit stations, allowing mid- and high-rise development projects that create densely populated vertical neighborhoods — mini-downtowns — that combine housing, restaurants, shops and offices.

This past March, the Seattle City Council unanimously approved a controversial plan to rezone for more intensive use, or “upzone,” portions of 27 neighborhoods and several commercial corridors, which encourages denser development and more high-rise buildings.

This was originally posted on Seattle Business Magazine by Bill Conroy

A steady influx of buyers continued to strain already tight inventory throughout the area in October. Home sales were up, as were prices in much of the region. With our thriving economy and highly desirable quality of life drawing ever more people here, the supply of homes isn’t close to meeting demand. Homeowners thinking about putting their property on the market can expect strong buyer interest.

As the Eastside continues to rack up “best places” awards, it’s no surprise that the area is booming. Development is on the rise, fueled primarily by the tech sector. The appeal of the Eastside has kept home prices here the highest of any segment of King County. The median single-family home price in October was stable as compared to the same time last year, rising 1% to $900,000.

King County’s 1.74 months of available inventory is far below the national average of four months. Despite the slim selection, demand in October was strong. The number of closed sales was up 5% and the number of pending sales (offers accepted but not yet closed) was up 11%. The median price of a single-family home was down 2% over a year ago to $660,000. However, some areas around the more reasonably-priced south end of the county saw double-digit price increases.

Seattle home prices took their largest year-over-year jump in 12 months. The median price of a single-family home sold in October was up 3% from a year ago to $775,000, a $25,000 increase from September of this year.  Seattle was recently named the third fastest-growing city in America.  Real estate investment is surging. A growing population and booming economy continue to keep demand for housing –and home prices—strong.

Both the number of home sales and home prices were on the rise in Snohomish County in October. Overall homes sales increased 7%, and the median price of a single-family home rose 5% over a year ago to $495,000.  Supply remains very low, with just six weeks of available inventory.

The following analysis of the Western Washington real estate market is provided by Windermere Real Estate Chief Economist, Matthew Gardner. We hope that this information may assist you with making better-informed real estate decisions. For further information about the housing market in your area, please don’t hesitate to contact me!

Washington State employment has softened slightly to an annual growth rate of 2%, which is still a respectable number compared to other West Coast states and the country as a whole. In all, I expect that Washington will continue to add jobs at a reasonable rate though it is clear that businesses are starting to feel the effects of the trade war with China and this is impacting hiring practices. The state unemployment rate was 4.6%, marginally higher than the 4.4% level of a year ago. My most recent economic forecast suggests that statewide job growth in 2019 will rise by 2.2%, with a total of 88,400 new jobs created. 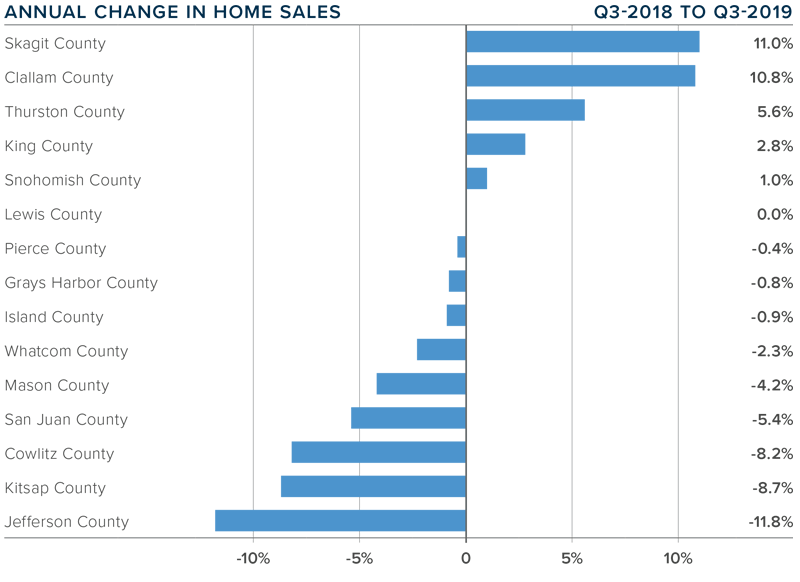 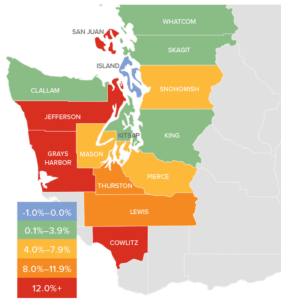 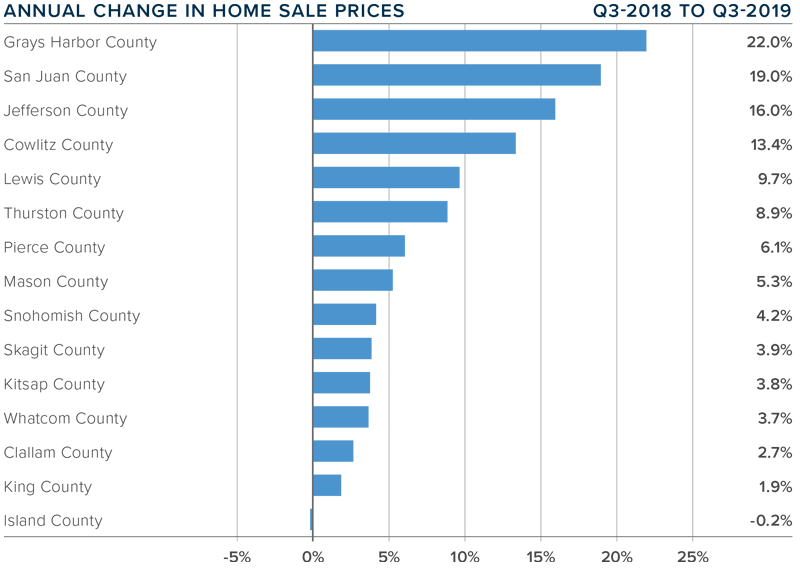 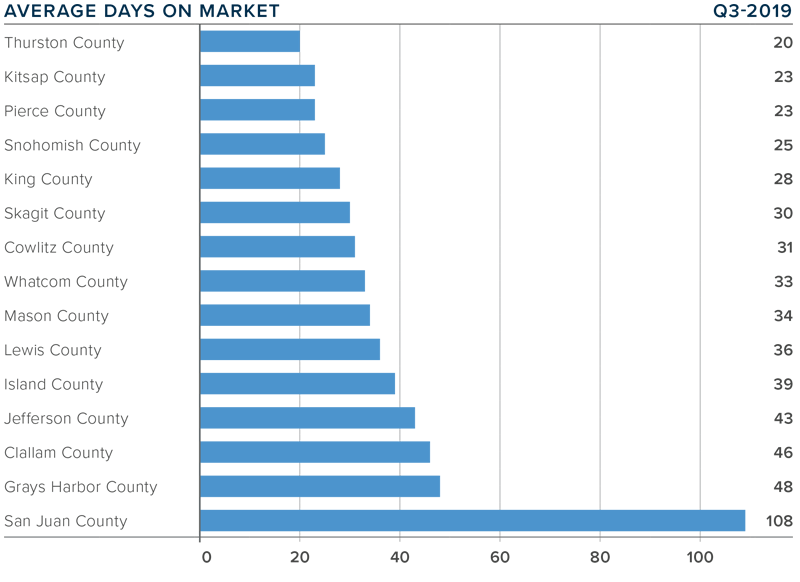 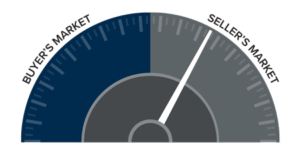 This speedometer reflects the state of the region’s real estate market using housing inventory, price gains, home sales, interest rates, and larger economic factors. I am leaving the needle in the same position as the first and second quarters, as demand appears to still be strong.

The market continues to benefit from low mortgage rates. The average 30-year fixed rates is currently around 3.6% and is unlikely to rise significantly anytime soon. Even as borrowing costs remain very competitive, it’s clear buyers are not necessarily jumping at any home that comes on the market. Although it’s still a sellers’ market, buyers have become increasingly price-conscious which is reflected in slowing home price growth. 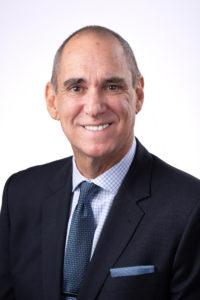 As Chief Economist for Windermere Real Estate, Matthew Gardner is responsible for analyzing and interpreting economic data and its impact on the real estate market on both a local and national level. Matthew has over 30 years of professional experience both in the U.S. and U.K.

While fall usually brings a decrease in sales activity, the opposite was true in September. The number of listings on the market dropped by double digits and home sales rose. It is still a seller’s market, however prices have stabilized. With interest rates near historic lows and employment levels at historic highs, the housing market is expected to stay strong throughout the fall and winter.

Long the most affluent area of King County, the Eastside continues to record the highest home prices in the region. The median price of a single-family home on the Eastside was $928,500 in September, an increase of 4% from a year ago and a decrease of less than 1% from August. The Eastside construction boom continues, indicating that developers remain confident in the strength of the local economy.

The number of homes on the market in King County fell by almost 20% in September when compared to a year ago. However, last fall saw an increase in inventory that was unusual for the time of year. The median price of a single-family home was $660,000, down just 1% from the same time last year. Cities in King County, outside of Seattle, all saw price increases. Sales were up 7% indicating no shortage of buyers.

Prices remained relatively stable, with the median price of a single-family home in September dipping 3% over a year ago to $750,000. As tech companies continue to recruit top talent to the area, Seattle’s population keeps booming and demand for housing remains high. While home sales traditionally dip in the fall, the city saw sales increase by 12% in September as compared to last year. Rising rents may push more buyers into the market.

Buyers continue to be drawn to Snohomish County thanks to a strong economy and housing costs that are considerably more affordable than King County. That influx of buyers is also driving up prices. The median price of a single-family home in September was $492,500, up from $484,995 the same time last year. At $167,500 less than the median price in King County, it’s a relative bargain.

Thank you for your inquiry.